We were called to sort out slow running drains. What we uncovered was an illegal plumbing installation that needed to be completely replaced.

A plumber can repair a blocked drain that is running slowly

This is probably every property owner’s nightmare. Imagine the shock this owner got when we showed them their slow running drains weren’t caused by something blocking the pipes, but instead, was an illegal installation.

Every plumbing installation should meet the Australian Standards to ensure it can function correctly. The owner of this property in Baulkham Hills called Nu-Trend so that one of our plumbers could work out why where drains were running so slowly.

What we discovered was shocking and ended up costing over $25,000 in repair work to ensure the situation wouldn’t get any worse & to bring the property up to Australian building standards.

Why do drains run slowly or have bad smells?

Nu-Trend is a bathroom plumber in Sydney that can help repair a blocked drain. 85% of the time it is a pretty simple repair because there is oil or grease build up, food scraps, toilet paper with some fresh number twos that are stuck, small toys or maybe even tree roots that are blocking the pipe.

Generally speaking these things can be cleared relatively easily in most cases and all the drains will run correctly. We’ll achieve this by either plunging, using our high pressure jet blasting pipe snake equipment or our CCTV camera to inspect the pipes.

Although sometimes we come across something that is a complete mystery – meaning there are no visible blockages and it is a sign of a larger problem with the whole plumbing system’s installation.

Was the plumbing at this property installed correctly?

As we inspected the sewer drainage system we could quickly see they weren’t installed correctly. We discovered many underlying issues & it led us to wonder how on earth the most recent sewer works even passed the Fair Trading inspections.

This is the list of issues that we discovered;

Issue 1. The main sewer inspection shaft located in the wrong position.
All drainage from the house needs to pass through this point. In the current sewer layout, the existing house drainage bypasses the non boundary shaft. Only The newly renovated downstairs drainage passes through the shaft. This needs to be corrected as per AS3500 Australian Standards.

Issue 2. The house has no inspection shaft or sewer access point.
In the case of a blockage, there is no rodding access for the house. This needs to be rectified as per Australian Standards

Issue 3. The newly installed drainage which picks up the new downstairs laundry and bathroom is back falling and submerged in water in numerous places.
This needs to be rectified as per Australian Standards. A sewer pump may be needed if the correct sewer gradient can not be met.

Issue 4. The outside Over flow gully is 1.5m deep.
The Australian Standard is no more than 600mm deep for cleaning and maintenance. This point also does not pass through the inspection shaft. It completely bypasses the shaft. This is incorrect and needs to be rectified.

Issue 6. No direct rodding access
We were unable to inspect the internal drainage to the newly renovated downstairs bathroom, as there is no direct rodding access to a toilet. To repair this would mean excavating inside the house and renew the internal drainage. As it stands it has not been installed correctly but would involve major works in jack hammering tiles to rectify sewer.

Issue 7. A reflux valve which has been installed with complete back fall and falling the wrong direction.
After laser diagnosing with a dumpy level there appears to be no reason as to why it was installed like this. If there was a reason, it still shouldn’t have been installed the way it was, it should be falling into a pump as you can’t install a sewer pipe with back fall, especially a reflux valve.

Issue 8. The current sewer service diagram uploaded on the Sydney water portal does not reflect the works that have been carried out on site.
The last stamped Sydney water diagram that I could obtain is stamped 1983. There is no evidence of a final inspection for the new extension works on the property.

Issue 9. There is the house main sewer pipe outlet between the boundary and the house which has been run in a the shape of a wobbly zig zag.
An inspector would have no passed this work as it’s completely prone to blockages/flooding.

So, quite an extensive list of issues relating to the property’s plumbing, including the fact they works don’t seem to have even documented. The renovation house plans had apparently been approved & a private certifier passed them but it appeared as though the plumbing had not gone through the correct approval process.

Even if it had, based on the installation it would not have passed. The sewer pipes should not be holding water or draining slowly. By their nature water should be moved away from the property.

How did we repair the slowly draining sewer pipes for this property?

As you can see from all the photos so far, this was an extensive blocked pipe repair because we needed to help the property owner install their plumbing to be compliant with local laws and regulations. This meant excavating what was there & then replacing it correctly.

The first steps including a CCTV camera inspection to determine the cause of the problems & then locating where all the pipes had been laid.

Once that was completed we re-installed the new plumbing, upgraded the the sewer service diagram to truly reflect what the current drainage system is on site, obtained final inspections from the Department of Fair Trading & eventually got it passed so that it could be uploaded to the Sydney Water website portal so that next time there’s any issues with the sewer another plumber can trace what’s going on and it matches the diagram.

We had to also deal with the freshly laid sandstone pavers in the driveway to make sure they weren’t damaged. With all the heavy vehicles & contractors involved this was difficult but we managed to be careful and not damage any of them.

The weather caused some delays because it is quite dangerous digging in the rain with an excavator. We also had to complete the excavation, replace the piping, get it booked and inspected, then backfilled before it became a hazard for someone to fall into or create a flooding issue. 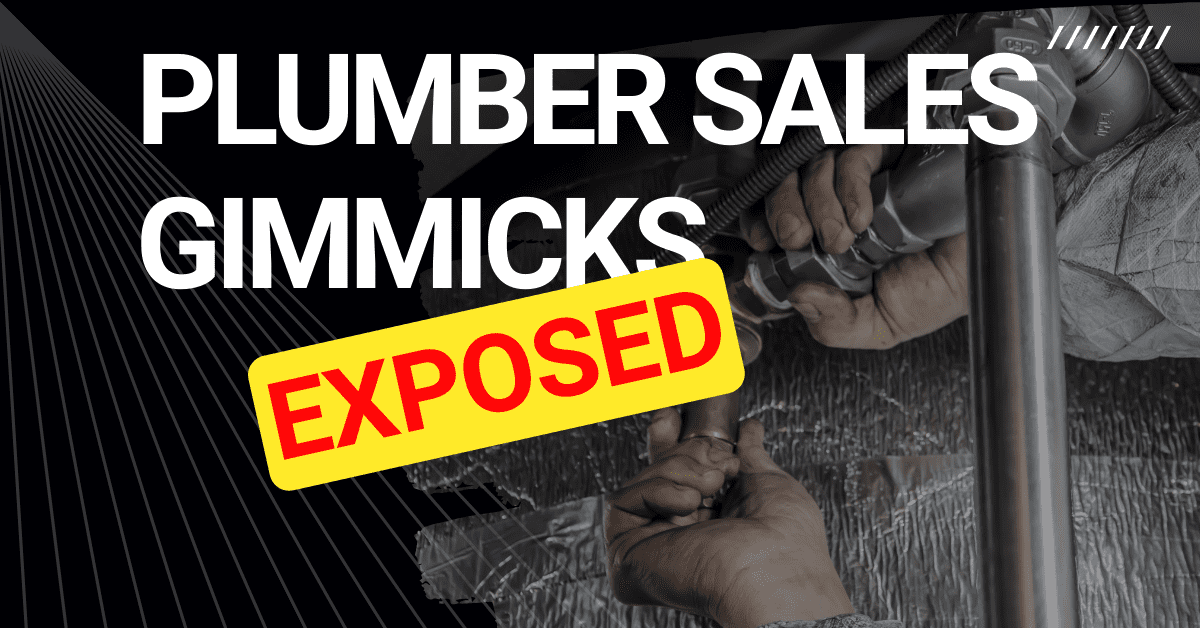 See some of our other plumbing work completed 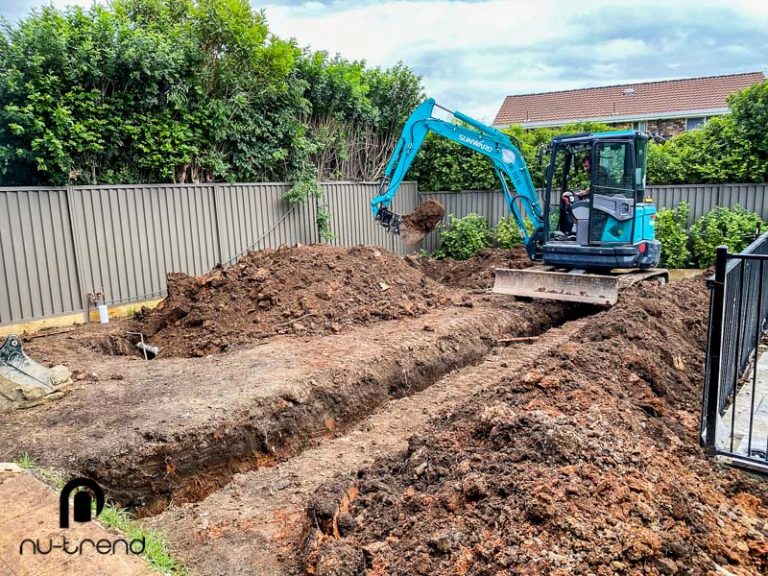 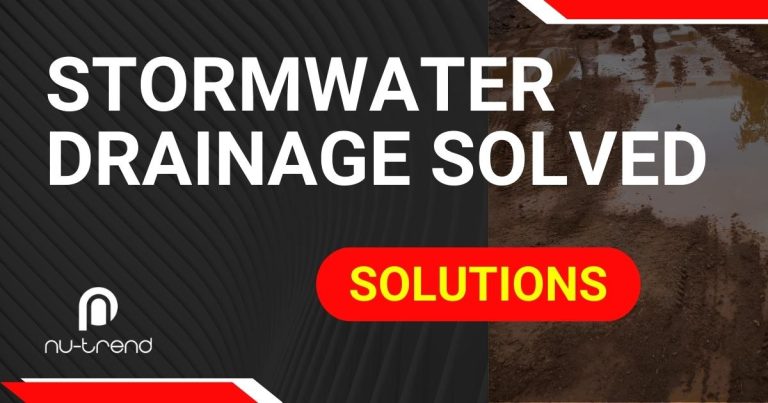 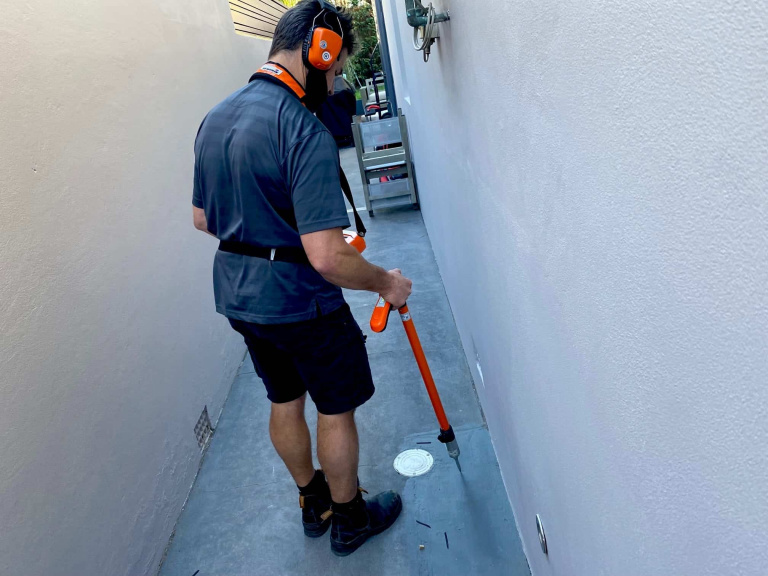 Nu-Trend is a Sydney company with more than 15 years experience completing bathroom renovations & solving plumbing problems. he Directors Rob and Rick are hands-on, and provide a personalised service.

15 years experience with a written commitment.

Rick and Rob are the hands-on directors for Nu-Trend. Rather than hire sub-contractors and manage their business from a distant office, they are on the tools, at your site & working towards delivering your bathroom renovation or plumbing service. It means you are talking directly to the owners of the business, the guys who are accountable and responsible rather than via email or through customer service teams.

They have a very single minded commitment to deliver a high level of professionalism and quality, they’ve been doing renovation contracting in Sydney for 15+ years. 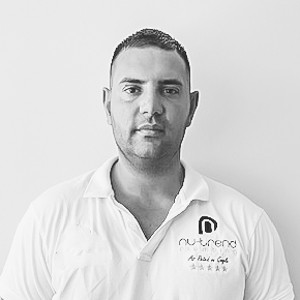 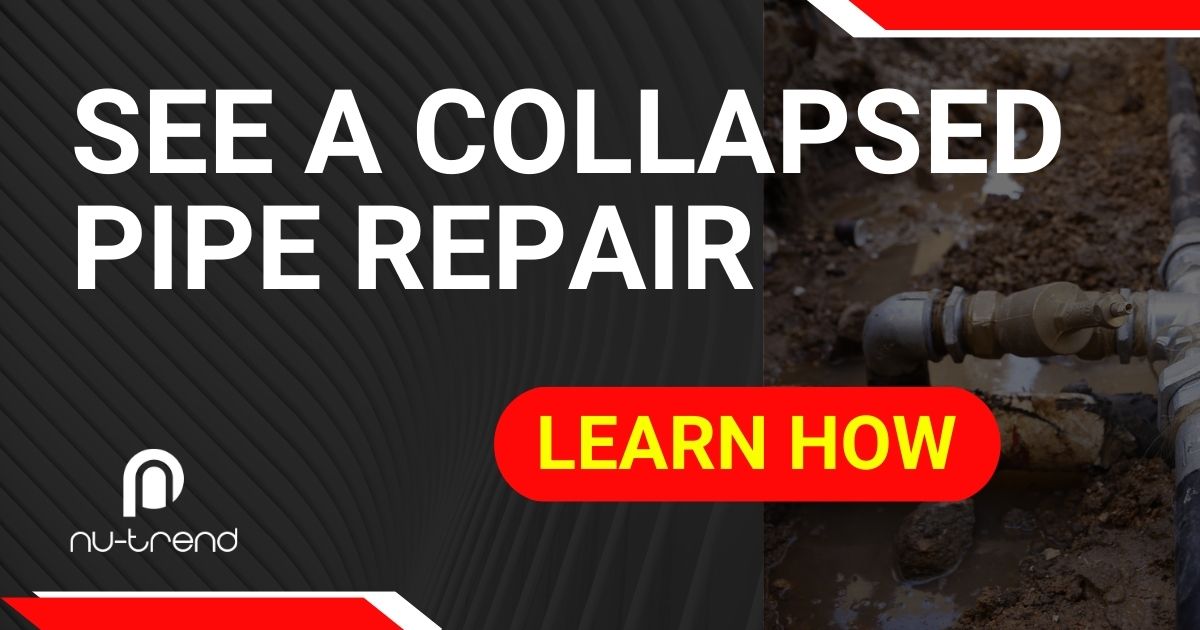 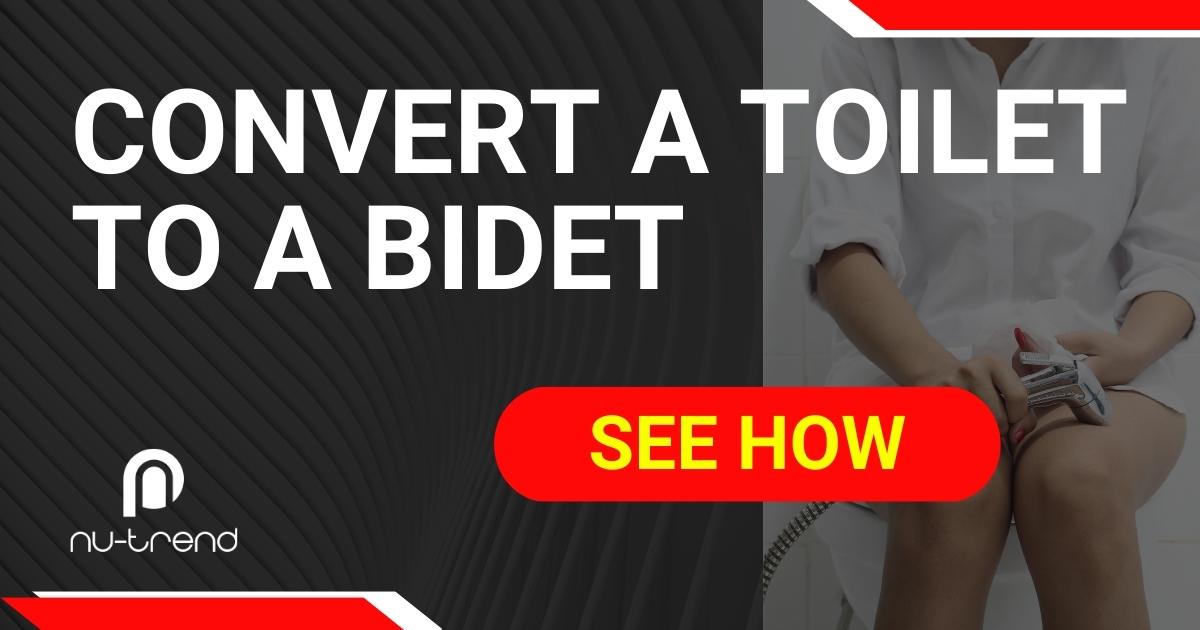 Converting an old toilet to have a new bidet in Sydney 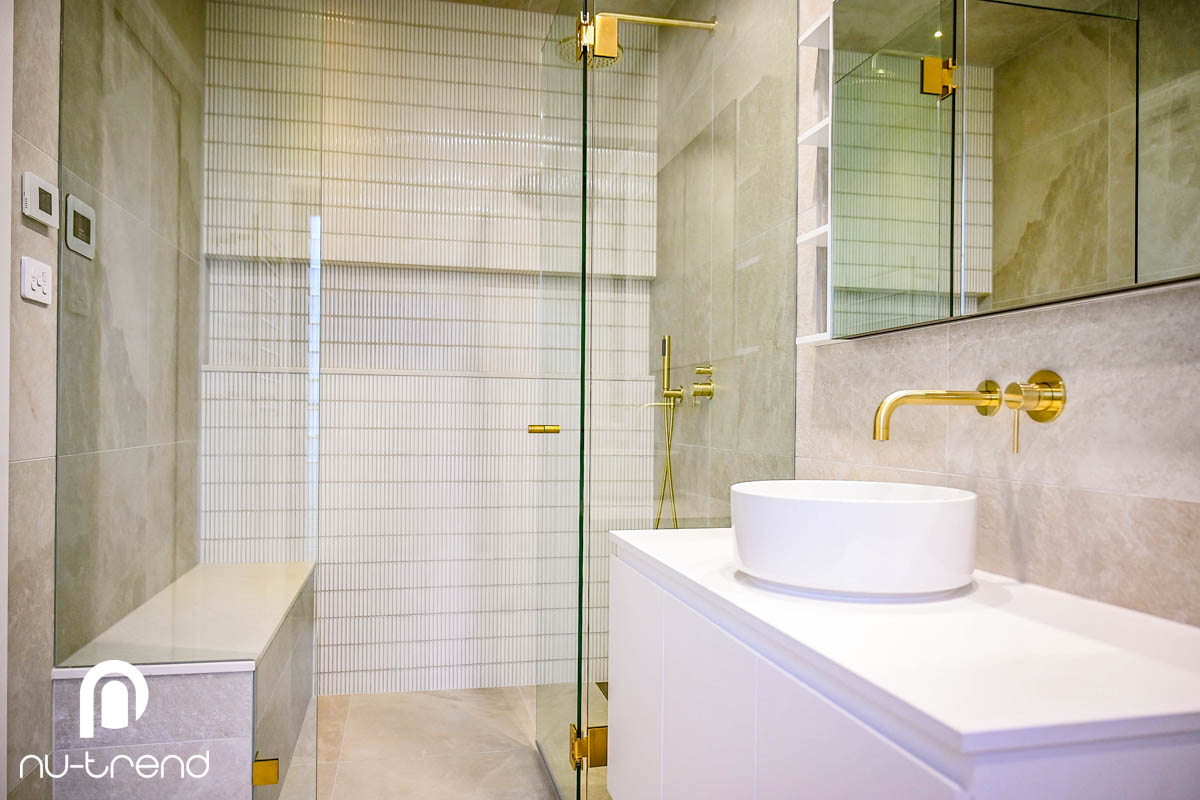 Converting a bathroom to have a steam shower room installed